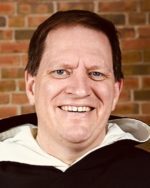 Huntington, NY – Very Rev. Allen Moran, O.P., was elected Prior Provincial of the Dominican Province of St. Joseph at the Special Elective Assembly at Immaculate Conception Seminary in Huntington, NY.  His election on January 14th was confirmed by the Master of the Order, Most Rev. Gerard Francisco Parco Timoner III, O.P., and is effective immediately.  Father Moran, aged 52, before his election was serving in Oakland, California for the Dominican Province of the Holy Name of Jesus as the President of the Dominican School of Philosophy and Theology (DSPT).

Originally from Illinois, Fr. Moran entered the Dominican Order as a novice for the Province of St. Joseph in the year 2000 and made first profession on August 15th, 2001.  He was ordained to the diaconate in 2006 and was ordained to the priesthood of Jesus Christ in May of 2007.  Upon completion of the S.T.L. degree from the Pontifical Faculty of the Immaculate Conception at the Dominican House of studies in Washington, D.C., he was then assigned to the Priory of St. Thomas Aquinas at Providence College in Providence, RI where he served and taught on the faculty staff.

Fr. Moran then was stationed as a member of the parochial staff of the Parish and Priory of St. Louis Bertrand in Louisville, KY which was followed by service in Rome as faculty at the Pontifical University of St. Thomas Aquinas (known as the Angelicum).  He was then elected Prior of St. Gertrude’s Priory in Cincinnati, OH from 2013-2018 after which he was appointed Provincial Treasurer/Economic Administrator from 2018-2022 until finishing his term and accepting the position as President of DSPT.   Fr. Allen will replace the Very Rev. Darren Michael Pierre, O.P., who stepped down in Fall 2022.   The Dominican Friars of the Province of St. Joseph look forward to Fr. Allen’s leadership in continuing the mission St. Dominic left us: preaching the Gospel for the salvation of souls. Give the Gift of Preaching this Christmas